I’ve divided this post into two parts: the first will address yesterday’s tragic events at the finish line of the Boston Marathon; the second will share a few of the happier moments from the weekend because, frankly, I’m weary of reading about the sadness that now surrounds what was meant to be a euphoric, celebratory event. I’ve desperately needed a reason to smile, so, in an attempt at some shred of normalcy, I wrote up a quick race report that will hopefully make you smile, too. So, here we go…

This was taken early Monday morning on the walk to the buses. I’m just about where the first bomb struck.

I sat this morning at the airport in Boston in a sort of grief-stricken stupor, trying to wrap my brain around all that’s happened in the past 24 hours. I awoke this morning to the TV replaying that infamous clip taken at the finish line. I begged my Dad to turn it off. I’d seen it on loop all afternoon yesterday while I was holed up in my hotel room just a few blocks away from the explosions, and I simply couldn’t take it anymore. A work friend put it perfectly, “I was gonna call my feeling this morning a ‘bad news hangover’ and realized the better word for it is ‘grief.'” Exactly. I put on my yellow Boston Marathon shirt–runners from around the country are wearing race shirts in support of the victims–and headed to the airport. Outside our hotel were a handful of military personnel clutching assault rifles. When I arrived at the airport, the police debriefed me. It all felt like a horrifically bad dream.

The airport was full of Boston Marathoners, all of whom were hobbling thanks to yesterday’s 26.2-mile effort, a journey that for some was cut short. But I’d venture to guess that they, like me, were trying to hide the aches pervading their legs because that post-race pain now seemed incredibly insignificant when others have lost their lives. Our hearts hurt more.

How fortunate are we that our races played out just so so that we were spared from the disaster? I’d finished maybe 40 minutes before the cannon-fire-like booms rang through the city, and my Dad had been sitting in the grandstands right across from the first bomb for over three hours. My editor Tish was on Boylston just before the second explosion, and my colleague and ’68 Boston Marathon winner Amby Burfoot was just three-quarters of a mile away before he was stopped and instructed to go home. Other friends were just meters away covering the race. (By the grace of God, all of us are safe and accounted for.)

What had been an impatient search for my father turned into a frantic one after the explosions. The crowds around me started piecing together what had happened just a couple of blocks away. I noticed a few people near me were crying. Panic started to set in. I hadn’t brought my phone with me, so I used strangers’ phones to try to contact him again. Thankfully (and miraculously), I spotted him across an intersection, saving both of us from what I’m sure would’ve been very unnerving and scary period of worrying about whether either of us were safe. When I started to process it all during the rush back to the hotel, realizing just how close we had come to the danger, I grabbed my Dad and buried my face in his chest, crying and terrified. How very fortunate we were.

I’ve spent the entire day surrounded by the tragedy. Between the man sitting beside me on the plane reading a newspaper with graphic photos of the scene on the cover to countless conversations with coworkers, my parents, and strangers at the airport, it’s all I can think about. After talking through it all day, here’s where I’m at with it all tonight:

Since this was my first Boston, my coworkers have spent the last few months showering me with stories about the unique magic that surrounds this race. I, like I’m sure every runner on that course, pictured the weekend and the race going off without a hitch, imagining turning onto Boylston, crowds screaming, then crossing the famous finish line triumphant. That this event, one that epitomizes jubilant celebrations of perseverance far deeper than finishing the race itself, is stained forever sickens me. This is not how it was supposed to happen. This is not how it played out in my head for months on end. This is not right.

I think this is why my brain is tricking me into thinking that somehow it’s not a big deal. That it wasn’t an earth-shattering, life-changing event. It’s put up a sort of barrier that’s guarding me from fully taking it all in. But then I see photos from the scene and read about those victims who didn’t make it, and it all hits me again. Realizing that so many of my close friends could’ve easily been one of the victims triggers yet another wave of emotions that I’ve been trying to suppress all day. I just can’t believe that this insane event hit so close to home. Much, much too close.

With that being said, I’m trying to focus on the positive as much as possible. That all of my friends are safe and sound fills me with an enormous amount of relief. My faith in the resiliency of the running community could not be any stronger, and I know we’ll pull through this. Though I worry about how this will affect the sport that touches every aspect of my life, I’m confident that we’ll endure and persevere. Heck, it’s what we do.

So here’s my Race Report of the 2013 Boston Marathon. Rather than a traditional recap, I wanted to share with you a handful of moments that filled my heart with joy:

Over the past 24 hours, I’ve read dozens of articles and blogs about the event. Here are a few that struck a chord with me:

So Close, Yet So Far, by Amby Burfoot

Bombing in Boston, by Lauren Fleshman

My Thoughts About Boston: Now What?, by Rebecca Pacheco

The View From the Finish Line Photo Bridge, by Charlie Butler

An Old Soul Aches for a Simpler Time, by Kelsey Cannon

I also have to give a shout out to my amazing, dedicated coworkers who tirelessly reported their hearts out since all hell broke loose yesterday. Check out their work here. 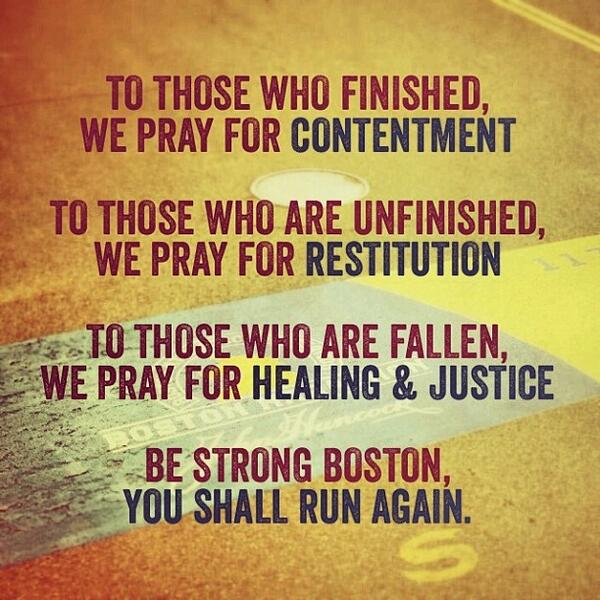