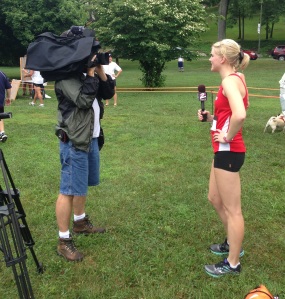 Switched roles and was the interviewee at a 5K I ran last weekend!

It’s been far, far too long since I’ve posted here. To get my blogging butt in gear, I’m dusting off the keyboard with a Marine Corps Marathon training update, the first of what’ll become a weekly series until October 27.

MCM will be my fifth (!) marathon, and I’m racing it through work with the Runner’s World Challenge, which, by the way, is one of the coolest running programs around. Not only do you get access to my colleagues’ seasoned advice and coaching, BUT you get VIP treatment on race weekend. Know what that means? Private porta-potties. That’s right. Join us, it’s worth it. (Got questions about it? Ask ’em below.)

Last year I worked the event and got to celebrate post-race with all of the Challengers. No matter the outcome of their race, every finisher said MCM was an incredible experience. One runner’s recap even moved me to tears. That was all the inspiration I needed to want to join in myself in 2013.

So here we are, just 98 days away from 26.2 miles through our nation’s Capitol. And let’s just say my training is off to a, uhhh, bumpy start. The RW Run Streak got me hopped up on speed and strength, which helped me run a post-college 5K PR of 19:42 (and snag a top overall female win!) at a race my old teammate puts on in honor of her mother last weekend. I’ve also been consistently hitting the gym two to three times a week, and I’m already feeling stronger head-to-toe. (And get this, I figured out how to enjoy planks, even the dreaded side planks! Rather that holding a position until my core gives out, I’m rotating positions every 20 seconds, doing at least three sets per gym session. Plus, according to my roomie, shorter bursts are better because you’re more likely to hold proper form. Rock hard abs, here I come!)

But…that momentum came to a screeching halt when I went on vacation with my family last week. I did one glorious run with my Dad on the beach, but that was it. I’ll be honest, whenever I’m with my family, running goes on the back-burner. I hardly ever see them, so the time is precious. I’d rather be with them than on the roads alone. I’ve got 50 other weeks to do that.

As much as I needed to hit the mental reset button, I’m ready to dive right back in to training. Taking a week off from the get-go has left me a bit anxious, but I know that my off-season streak and newfound need to lift stuff has given me a solid base. Since strict day-by-day plans are still the bane of my existence, I’m going to keep up my flexible routine. Here’s a rundown of my goals and what I’m hoping to do training-wise:

That being said, I’m off to the gym! Tomorrow, I think I’m going to break out the earbuds, knock out 12 miles as early as possible, and use coffee, a strawberry-banana-chocolate crepe, and a nap as incentive to get ‘er done.

Until next week, happy running everyone!

QUOTE OF THE POST: There’s no such thing as bad weather, just soft people. – Bill Bowerman