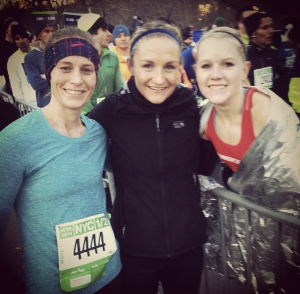 If I learned anything from the NYC Half this year, it’s BRING THROWAWAY PANTS.

Also, I think I’m in love with half-marathons… Yep, I definitely love ’em.

Like last year, I went into this race with the goal of running by feel. If I felt good, I’d go with the flow and race it. If not, no biggie. It’s only a training run for Boston to Big Sur.

Well, it’s hard not to get jazzed up when you’re surrounded by over 20,000 other runners in Central Park on a chilly March morning, especially when you get a surpise boost of encouragement from twitter friends! (Thank you Jocelyn, Corey, and Mary!) And God knows I’m not able to relax during the first few miles of a race. Gotta go guns blazing, right?

After freezing my buns off for half an hour before the race (re: throwaway pants are essential), off we went, heading north up the east side of the park. The gradual inclines warmed me up pretty quick (thank goodness), so I settled into a comfortable but quick pace. At the top of the park, we ran a hairpin turn before heading into the Harlem hills. Personally, I love hairpin turns. Marine Corps had one, too. I get SO pumped up being able to “watch” the race for a bit and keep an eye out for familiar faces. I spotted elite runner Desi Davila Linden and Corey again, which was so happy on so many levels. The energy among the runners and spectators was electric.

After the biggest hill at the top of the park, the next two to three miles brought more rolling hills before we exited onto 7th Avenue. I’ll admit, I started to regret pushing it so hard in the park. The hills wore me out. But like last year, the epic, towering view down 7th Avenue was just incredible. It’s literally so breathtaking and awe-inspiring that you can’t really wrap your brain around the fact that you’re running down the center of one of the most famous streets in the world. And you don’t even have to dodge tourists.

It goes without saying my pace quickened quite a bit at this point of the race.

Halfway down 7th, a band started playing YMCA. If you read my blog, you’ll know that the same song played during the Boston Marathon last year. It’s one of my favorite happy memories from that otherwise awful day, so hearing it again at this race left me brimming with emotions, some good and some bad. April 21 is going to be full of moments like this one, I know it.

A brief turn toward the Hudson River brought us to the Westside Highway. At this point, there’s just over five miles to go, and they’re all flat as a pancake. Still high off my jaunt through Times Square, I found a rhythm running around 6:45ish pace. I still, surprisingly, felt comfortable and in control. This is why I love half-marathons.

I felt like I was actually racing rather than surviving. And since 13.1 miles seems short now compared to a marathon, I wasn’t afraid to push the gas pedal a little more. I kept ticking off the miles, soaking in views of the Statue of Liberty, then running in the shadow of the now-complete Freedom Tower before deciding to gun it the last two miles.

At this point, I knew a sub-1:30 was just out of reach, but I was primed to run a PR. A final push through the finish clocked me in at 1:31:05, an almost 2 minute, 30 second PR. Talk about the runner’s high. The whole race was one long hit of the runner’s high.

To top it all off, I ran into an old teammate of mine from Lehigh AND Jenny from Hood to Coast, who had also just crushed her race with a sparkly new PR. So much happiness!

Sunday reaffirmed how awesome this race is and left me feeling much more confident going into Boston and Big Sur next month. Michele summed up my feelings perfectly:

Yes. Exactly. All of those miserable, slushy miles were worth it.

QUOTE OF THE POST: “You’re off to great places, today is your day. Your mountain is waiting so get on your way.” – Dr. Suess