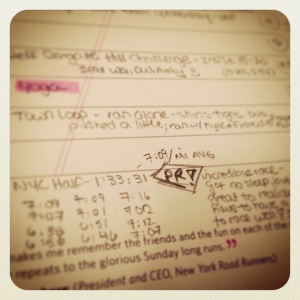 PR! – A high point from my March training.

Simply put, March was just madness: every smokin’ fast long run was countered with a crappy one, my get-serious-for-Boston training plan probably got more views from y’all than from me (but I ran a half-marathon PR, so I must be doing something right…right?), my confidence level was more wobbly than my yoga poses, and speaking of yoga (and core), yeah, that didn’t happen much this month either. My butt was much happier on my couch than on my mat. Not okay.

Today, I’m in the midst of the infamous “taper crazies.” Mentally, I’m equally freaking out about this cold I can’t seem to shake, but confident that come April 15th, those 60ish vertical long run miles with pay off. Heck, my half PR proved that I am in shape. Deep down, I believe I’m going to have a good race. Just get me to the line. Now. Please.

Because there’s literally no rhyme or reason to my March training, here’s a rundown of what went down:

Looking forward to April a.k.a. my crazy/ridiculous/epic spring racing month, the overall goal for the month is confidence in all aspects of my life from work to relationships to racing. There are SO many exciting things happening this month, and I don’t want to ruin them with blah lapses in focus like I had in March. So this month, I want to:

So without further ado, here goes nothing! Keep an eye out for race reports. I’ll do my best to write them as soon as I can!

QUOTE OF THE POST: “In my experience, there’s one constant to every marathon: fear. You stand on the starting line, and you wonder: Am I going to make it today? The marathon makes you feel naked—a runner in only the sheerest clothing. It can strip you, it can humble you, it will extract a harsh penalty if you don’t treat it with high regard. The day I stop fearing the marathon will be the day I stop running them.” – Amby Burfoot, 1968 Boston Marathon winner (and probably one of the coolest people I know.)