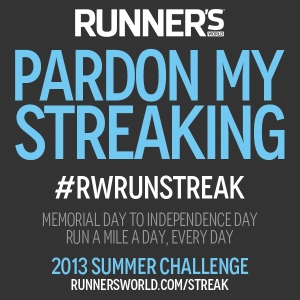 In case you missed my tweets over the weekend and the super-snazzy badge at left (and at right and down a tad), I’m officially going to attempt the summer edition of the #RWRunStreak. After an unfortunately delayed flight home derailed my winter streak last year, I’m determined to finish at least one of these dang things. Thanks to my strong aversion to heat and humidity, I know this 39-day streak will be tougher than the winter one. But for that same reason, I want to use it to get my butt out the door during my in-between-marathons training lull. I’ll be updating this post throughout the streak to track my progress between now and July 4, so check back to see if I’m (hopefully) still on the bandwagon! And let me know in the comments section if you’re streaking, too! I’d love to have someone to vent to about the ungodly about of laundry that’s inevitably going to pile up!

So, to kick the whole thing off…WE’RE GOING STREAKING!

Day 13 Update: 62.25 Miles To Date: I’m going to kick-off this recap with wow, this streak has surprisingly gone much more smoothly than my winter streak! Heck yes! I haven’t once seriously considered quitting (granted, it has been pretty mild weather-wise, so that’s helping), and it took next to no time to just expect to run every day, no questions asked. The first few days, my absurdly inflexible hips and weak butt hurt like a mother f-er (pro tip: don’t take a week off, then do a 7-mile hill run) to the point where I woke up a few mornings and immediately felt the need to stretch out. But I mixed in a few “recovery” 1-2 mile days, and so far I’ve been in the green. I’ve done a couple 7.5-mile long-ish runs and did an impromptu 5-mile tempo run–my first in a long, long time–yesterday. Considering I haven’t done any genuine speed work in a while, it actually didn’t go half bad! So far, this streak is shaping up to be good off-season, maintain-my-strength-before-my-fall-marathon training. =) If it weren’t for my broken washing machine and the ever-growing pile of dirty running clothes (a side-effect to this streaking business), I’d couldn’t be more glad that I decided to give it another go. Until next time! 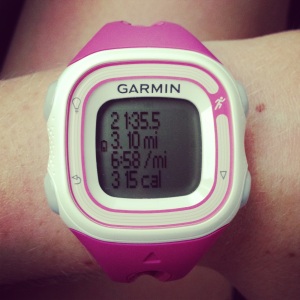 Day 23 Update: 103.25 Miles To Date: Hot damn people! We’ve surpassed/plowed through/cruised beyond the halfway point! Just 16 days left until the finish line. Unlike my previous update, I finally (and not really surprisingly) had some days where I thought dang, I’d really rather NOT run today. My hips have been sporadically tight (but I rediscovered my love for hurdle walkovers – had my first date in over a year with them last weekend) and my left knee has been achy, which is weird. But I’ve iced a bunch and done a few easy one-mile recovery days, and all seems to be more or less in working order. I’m trying to be smart and not hurt anything, but I’ve come too far to quit this now. On the bright side, I finally got a hard 5K effort out of my system today! I had to push my run to after work but squeeze it in before an impending flash flood. I thought about doing an easy mile and call it a day, but I felt good and decided to push it. Won’t lie, I love, love, love those days when you unexpectedly feel good! Now I need to do a real 5K! And thankfully, the washing machine is fixed. Thank. God.

Day 39 FINAL Update: 164 Miles Total: Ahhhh the streak is OVER! Can’t really believe I made it, and if anything, I emerged on the other side more motivated than ever to run. I capped off the streak with a four-mile run (for the Fourth of July, of course) in the blazing summer heat. Had I not been streaking, I likely would not’ve run at all. I even began integrating some speedwork, AND I became a member of the gym downstairs! Between my super fit roomie, watching nationals, and the fact that Marine Corps Marathon training starts on Monday (!), the need to regain some measure of upper body strength and speed has finally returned. It took over a year, but it returned. Heck. Yes. (More on this later – stay tuned). So to cap off the streak, here’s a bit of what I learned along the way:

Looking forward, I hope this streak serves as a solid springboard for my next bout of marathon training. During the streak, I started integrating some speedwork and lifting. If hitting the track and gym becomes a habit, I’d be thrilled because I know both can only help in my quest to drop my marathon PR. I’m ready to get full-body strong, and the streak inspired me to really want it. And to that I can only say, “Thank you RW Run Streak!”