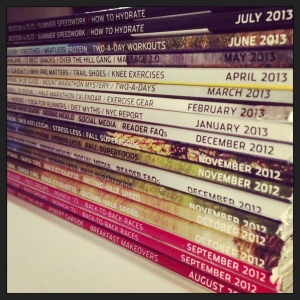 A couple weeks ago was my alma mater’s graduation day, and a couple weeks before that was my one-year “run-iversary” (I consider mine May 4, the day of my last collegiate race, because I couldn’t tell you what day I started running!). And somewhere in there was my official one-year anniversary at Runner’s World. Seriously, say what? It’s been a whole year?!?

The last time I spoke with my Dad, he said, “Can you believe how much you’ve experienced in just one year?”

After falling right back in sync with my college teammates like nothing had changed, like the year had been shortened to maybe a month, I genuinely can’t believe how different a runner I am today. I’m thankful to report that I’m still just as in love with the sport as I was a year ago. I’d even venture to say that that passion has grown deeper. Career-wise, to say it’s been eye-opening is an understatement.

So here’s what happened this year and a bit of what I learned along the way:

And for some not-nearly-as-life-changing, but still pretty sweet highlights:

Since it was such a whirlwind of a first year in the “real world,” I wanted to take the time to collect all that happened in one place so future me can go back and remember it. Looking back on this year, all I can say is that I couldn’t be more thankful for the opportunities my work has given me and the people who I work with who have made me a better, happier runner. It’s opened my eyes to how truly unique the running community is, and I’m reminded every day of how lucky I am to be a part of it. Runners are a different, but brilliant breed. This year–maybe more than any in at least my life time–this fact was all the more apparent. And I got a front-row seat. What a whirlwind.

Here’s to another incredible year!

QUOTE OF THE POST: “Keep your head up, keep your heart strong.” – Shalane Flanagan