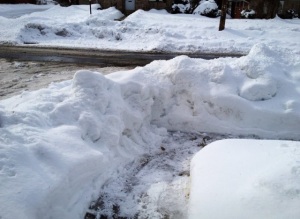 Yes, I realize that last time I blogged, I wrote about how the snow ain’t so bad. But two weeks later…

I’ve had enough of this winter!

Let me explain why I’ve changed my tune:

For yesterday’s long run, we did 13.75 miles on our hilliest, most challenging loop. Whether it’s balmy and humid or bone-chillingly cold, this quad-busting route hurts like hell. BUT, even when the inclines leave you wheezing, it rewards you with these breathtaking views of the open, rolling farmlands dotted with old farmhouses. The roads are empty. It’s amazing.

Other than my first 10-miler on a treadmill, I can’t remember the last long run I did during this training cycle that didn’t involve navigating through snow and ice. So I asked the guys if we could do the crazy hill loop because I wanted to get in a real, quality distance run for once. (No) thanks to yet another snowstorm on Saturday, we spent what felt like 13 miles of the 13.75-mile run on either a slick sheet of ice or beach sand-like snow. Not amazing.

Sure, the farmlands blanketed in white were stunning as always. But it was hard to appreciate the views when I was focused on just staying upright. Deep down, I know that the tricky terrain is a bonus workout that’s actually making me stronger. But moving at a snail’s pace up and down hills is doing absolutely nothing for my confidence. I really want to believe that these tough runs will translate into a solid spring marathon just like the slow and steamy summer runs make for a fast fall marathon. My frozen fingers and toes are crossed.

I know I could be doing these runs on the treadmill. But honestly, I just don’t have it in me to sacrifice my daily dose of fresh air when I’ve been cooped up inside even more than normal these days. At this point, though, it feels like a lose-lose situation. Extra kudos to everyone who has made the commitment to get those workouts in regardless. Teach me your ways!

The yucky part of it all is that, since I’m not running Boston as a goal race, I’m feeling even less inclined to get all of my runs in. Rather than doing four or five treadmill miles during a snow storm, I’m opting out of the workout entirely. I just can’t get into a rhythm with my training.

That said, here’s my silver lining:

Since I apparently can’t get enough of this marathon business, I’m hoping that my involuntarily scaled back training routine right now will benefit me later on this year when I’m gearing up for my goal race in October. Even though it feels like I’m cutting myself short, maybe the extra rest will keep me from burning out when I’m actually training for a PR.

I’ve still managed to do my strength routine once a week. I’d like to be going twice per week, but I’m okay with not skipping it entirely for now.

I’m trusting that, come spring and some dry, heavenly roads, I’ll feel fit and more like myself again. I had one fantastic five-miler a couple weeks ago on a warm-ish day. Here’s to hoping that more of those will happen when this Arctic tundra decides to thaw out.

The forecast says Sunday will be sunny with a high of 47 degrees. Hopefully I’ll have a decent run that’ll re-inspire me and get me mentally back on track!

QUOTE OF THE POST: “When it’s pouring rain and you’re bowling along through the wet, there’s satisfaction in knowing that you’re out there and the others aren’t.” – Peter Snell